SAN DIEGO, Calif. (October 2, 2022) – With a winning record of 10-6-6 (W-L-D) in its historic inaugural campaign, San Diego Wave Fútbol Club has finished third in the NWSL standings and will therefore host a quarterfinal playoff match on Sunday, October 16. Slated to face the Chicago Red Stars, San Diego Wave FC returns to Snapdragon Stadium for one last match of 2022 in hopes of ultimately earning a trip to the NWSL final in Washington D.C. on Saturday, Oct. 29.

After selling out Snapdragon Stadium on Saturday, Sept. 17, with 32,000 fans, the club looks to pack out the stadium again with tickets for Oct. 16 going on sale soon. The match will also be televised nationally on CBS Sports Network.

San Diego Wave FC clinched its spot in the quarterfinals last Sunday against the Orlando Pride and is the first and only expansion team in league history to make the playoffs in its inaugural season. The team fought back from a two-goal deficit on the road to earn a 2-2 draw and its first-ever playoff berth.

Also announced today, Wave FC forward Alex Morgan has officially won the NWSL Golden Boot race with 15 goals and two assists in 17 games played. This is a single-season career best for the Southern California native who recorded three braces and one four-goal match this season.

The 2022 NWSL playoffs will feature the top six teams (OL Reign, Portland Thorns, San Diego Wave FC, Houston Dash, KC Current and Chicago Red Stars) with the top two seeds earning a first-round bye to the semifinals. The semi-finals will take place the weekend of Oct. 22-23 on CBS Sports Network ahead of the Championship game on Oct. 29. All playoff matches will stream internationally on Twitch.

With two weeks until Wave FC’s inaugural playoff match at Snapdragon Stadium, fans should stay tuned for playoff tickets to Wave FC’s Oct. 16 match to go on sale soon. Season ticket deposits for the 2023 season are also on sale now. Put down a deposit today to secure your place in line for 2023 seat selection, as well as an array of benefits for season ticket holders.

San Diego Wave Fútbol Club is the 12th and newest member of the National Women’s Soccer League (NWSL). The club’s vision is to be a force for good through the game of football and is led by President Jill Ellis, former head coach of the US Women’s National Team (USWNT) and two-time World Cup champion. Together with Head Coach Casey Stoney, the club will bring the highest level of world-class, professional soccer to San Diego. USWNT standouts Alex Morgan and Abby Dahlkemper were two of the first players signed to the club that consists of athletes representing six international soccer federations, including US, Mexico, Canada, Sweden, England and Australia. The team played the first 11 home games in the 2022 inaugural season at its temporary home, University of San Diego’s Torero Stadium. Wave FC opened the new Snapdragon Stadium on Sept. 17 with an NWSL record-breaking sellout of 32,000 fans. Learn more about the club and players at www.SanDiegoWaveFC.com. 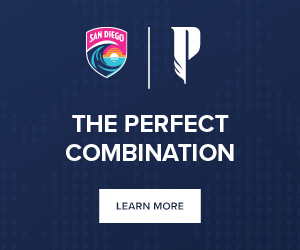